March to a Different Drummer in the Gulfstream Park Turf 'Cap 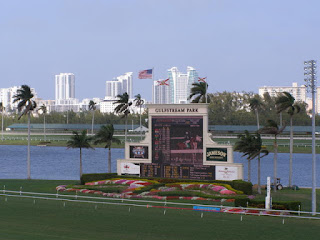 A fortnight after the Pegasus World Cup Invitational Gulfstream Park is hosting a grade one turf race for 4-year-olds and up. With the purse of $300,000 it attracted a solid field of eight. Based on morning line odds there is not a clear favorite to win this race. That makes the handicapping challenge even more interesting and hopefully profitable. The pace should be honest and stretch dual intense.

Here is the field: 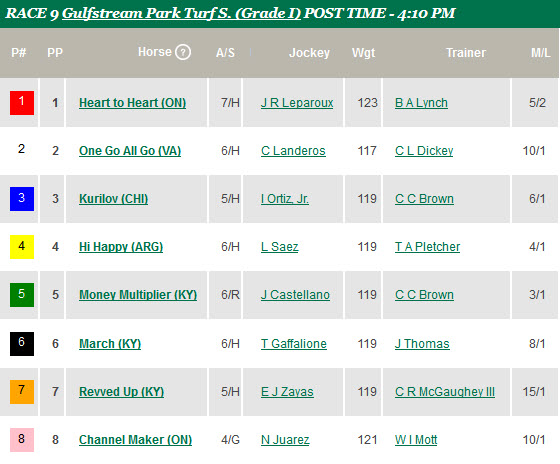 1.   Heart to Heart (English Channel) with earnings over $1.5 million he is the class of the field. With the inside post expect Leparoux to hustle him out of the gate. The Gulfstream Turf course has been favoring that approach. Yet this short-priced horse seems to be off his best and may struggle with the distance. Unsure.

2.   One Go All Go ((Fairbanks) has been showing improvement of late, but unlikely ready to make an impression in this race.

3.   Kurilov (CHI) ( Lookin At Lucky) may contest the early pace. His attempts on the grass have been less that exciting, yet Chad Brown cannot be over looked, especially with a 25%-win-rate when going from dirt to turf.

4.   Hi Happy (Pure Prize) can also scoot out of the gate. Getting hot jockey, Saez, speaks volumes for what trainer Pletcher thinks about his chances. Layoff not a huge problem, although having not raced in ten months doesn’t feel warm and cuddly. His last two attempts after substantial layoffs were not great successes. Big question mark.

5.   Money Multiplier (Lookin At Lucky) seems like Brown’s horse. Castellano stays aboard. He seems like one of the ones that will be running at the end. Distance of the race will not be a problem. His performance in the Red Smith at 1 3/8 miles at Aqueduct shows that. Better yet, that race was a “key race” where of four of the horse that ran since that race, two have won.

6.   March (Blame) is the son of the 2010 Breeders’ Cup Classic winner that beat Zenatta at Churchill Downs. He may be stepping up in company, but he is coming into form. His workouts and recent performance over the track suggest he may be ready. Surprised that Chad Brown was replaced as trainer by Thomas? Picking up the local rider, Gaffalione, adds to his allure.

7.   Revved Up (Candy Ride) looks like a promising long shot who can light-up the exotics’ board. He, too, came out of a “key race” at Churchill Downs in November. Trainer Shug McGaughey III must be respected.

8.   Channel Maker (English Channel) at four is the youngster in the field and will not respecting his elders as the field turns toward home. Castellano’s choice to ride Money Multiplier instead of him after his nice showing at Del Mar last out should give pause.

Although horses from the inside and on the turf have been successful, 25% win rate in the last week, the pace will be hot and the likely winner will come off the pace. Four horses have the right running style for this task ---Money Multiplier, March, Revved Up and Channel Maker. Although Money Maker seems the best of the quartet, Gaffalione on March might surprise at a price.

Posted by ThoroFan Blog at 7:18 AM

ThoroFan Blog
Giving the fan a voice. ThoroFan is the only national fan organization created specifically to serve the Thoroughbred horse racing fan. ThoroFan wants people of all ages to know what we already know — that thoroughbred racing is the most exciting two minutes in sports, and a life-changing interest. Discover more at our website.