Sam F. Davis was a businessman in the Tampa area who served as president of Tampa Bay Downs from 1972 through 1980.  The next year, the track inaugurated this stakes for three-year-olds in his honor.It has been run on dirt at a mile and a sixteenth every year but 1981 (one mile seventy yards) and 1985 (seven furlongs) and gained its Grade 3 status in 2009. 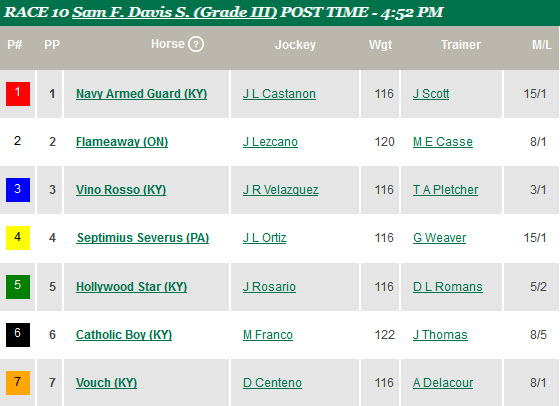 Catholic Boy comes into the Sam F. Davis as the class of the field.  He has never put forth a poor effort in four career starts, and though most of them came on turf, he handled dirt well two months ago with a decisive victory in the Remsen (G2).  He hails from the barn of Jonathan Thomas, who knows how to get a horse ready to fire off a lay, and Catholic Boy himself ran a good fourth behind Mendelssohn in the Breeders' Cup Juvenile Turf (G1) last year, first off a two-month freshening.  The biggest question about Catholic Boy?  The surface.  It has claimed so many before, horses who had such good form coming in but could not handle the deep, beach-sand footing at Tampa Bay Downs.    Even though he has a few works over the surface, if there is a credible alternative proven on race day, it's worth looking there.

Enter Vino Rosso.    Though Vino Rosso will not be a massive price -- probably the second betting choice after Catholic Boy – he is the only one in the field with a victory over the Tampa Bay Downs dirt.  The well-meant Todd Pletcher trainee got his diploma at Aqueduct in November, then returned with a comfortable N1X allowance score at Tampa on December 22.  Rider John Velazquez paired with Vino Rosso for both of those outings and returns to the irons here.  This will be Vino Rosso's first test, but in neither of his previous efforts did it look like he showed his bottom.  He'll likely get the jump on Catholic Boy, and just a reasonable step forward from his previous work gets Vino Rosso to the wire here.

The other major contenders in this race include Flameaway, Hollywood Star, and Vouch.

Flameaway
has been strong on the turf, but his one effort on dry dirt disappointed.

Hollywood Star
was scratched from the Holy Bull to run here, but he has the same Tampa surface question as Catholic Boy and should both take to the surface it seems Catholic Boy stands to out finish him.

Vouch
has the most appeal among this group. He has major tables to turn on Catholic Boy from the Remsen, sure.  But, the cut back to a mile and a sixteenth from the mile and an eighth last out may serve in Vouch's favor.  Though Flameaway may give Vouch some contention on the front end, the son of Yes It's True has shown some tactical speed and has more trustworthy dirt form of the front-end pair.  And, though he has never raced at Tampa, he does come out for trainer Arnaud Delacour and rider Daniel Centeno, who both know the racetrack (and its winners' circle!) as well as anyone.

Selections:
#3 Vino Rosso
#6 Catholic Boy
#7 Vouch
Longshot:  #1 Navy Armed Guard is the sole maiden in the field but has been consistent enough to hit the board in four of his five outings to date.  What makes him most interesting is his most recent race -- his first over the Tampa dirt, and his first at two turns.  Second, beaten a neck, the Joan Scott trainee ran the best race of his career so far and proved he could handle the Tampa surface.    Navy Armed Guard is going the right way and should be good enough to rally late and invade the exotics at a big price here.
Posted by ThoroFan Blog at 6:53 AM

Email ThisBlogThis!Share to TwitterShare to FacebookShare to Pinterest
Labels: 3YO Colts; 2018 Triple Crown

ThoroFan Blog
Giving the fan a voice. ThoroFan is the only national fan organization created specifically to serve the Thoroughbred horse racing fan. ThoroFan wants people of all ages to know what we already know — that thoroughbred racing is the most exciting two minutes in sports, and a life-changing interest. Discover more at our website.